In our latest blog, we invite you to discover the man behind one of the coolest names in pro cycling.

Ok, so let’s get right to it: many have asked me where my name comes from. Well, it’s a funny story: one evening, my parents were watching a western whose main character was called Yankee. The thought sprung to their mind immediately and they knew this was going to be the name of their unborn son. I love it, it fits perfectly with my personality and I’m proud to bear it. Now, as I prepare to become a father myself, I can promise you that my child’s name will also be special.

But enough about that, I’m sure you’re more interested in how I ended up being a member of the Wolfpack, so here it goes. Back in the day, I was a rider myself, but never made it further than the U23 ranks, so after closing this chapter I wanted to remain in the sport as mechanic or professional masseur. In the end, I decided in the favour of the latter, went to school, and now, 17 years later – last four of which I have spent with Deceuninck – Quick-Step – I am still here, having worked with some of the best riders in the world.

Being Italian, many of you would expect to name Milano-Sanremo or Strade Bianche at the top of my list, but the races that stand out for me are the Belgian Classics, and that’s thanks to one man: Tom Boonen. I have many beautiful memories with him, one of which is from my early days on the team. One afternoon, during a training camp in Spain, I got a list with the names of the riders I was going to massage that day. I had to look twice on the small piece of paper, because I couldn’t believe I was going to massage Tom Boonen, whose fan I’ve always been. Getting the chance of working with him was mind-blowing!

That evening, I asked Davide Bramati to come to my room to take a picture of me and Tom, but when he did, he had a very serious look on his face and said: ‘Yankee, there’s a problem with Tom, what did you do?’. I instantly panicked, but it turned out to be a joke in the end. Classic Brama! 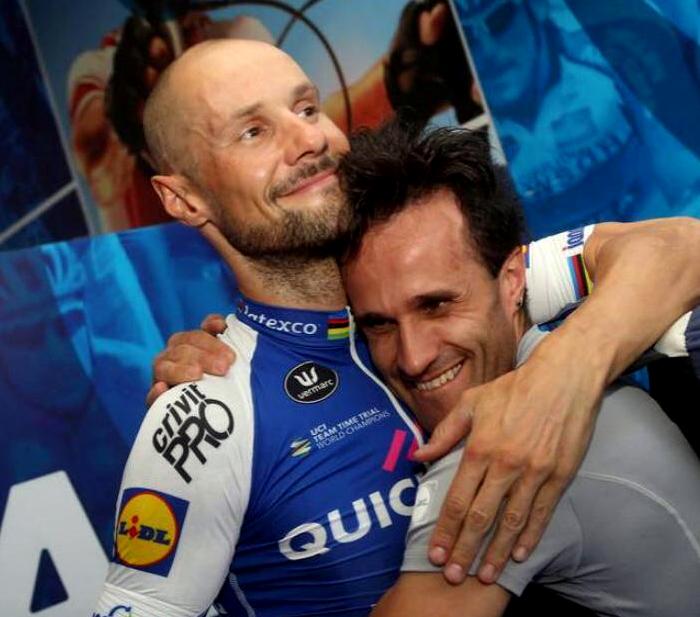 I was lucky to be at the Vuelta a San Juan in 2017, when Tom won his last pro race, it was special to have the opportunity to share such a great and unforgettable moment. But despite this, I didn’t expect what followed just two months later, at the finish of Milano-Sanremo. Minutes after he concluded the race, Tom handed me the jersey he wore that day. It was so emotional and his gesture left me speechless. His charisma and personality made him a rider like no other, one who I continue to admire so much.

A day at the office

When I’m at the races, I wake up at 6 in the morning and go for a 10km run, listening to some music, like Muse, Robbie Williams, Coldplay, Depeche Mode, David Bowie, or Hooverphonic. At 7, I prepare breakfast with the staff and clean the cars for the races, while my colleagues take care of the sandwiches and bottles. Then I jump in the car and depending on how the race goes, I hand out bottles to the riders, if necessary.

Later I have to be at the finish in time, in order to wait for the riders and hopefully run behind them as they head to the podium following their victory. After the ceremony, I accompany them to the hotel, where I massage one of two of the guys. My day ends in the evening, but I can’t complain. Being on this team, being a member of the Wolfpack, is something that makes me extremely proud and I feel very lucky to be here and do what I enjoy the most.

We have an amazing group of riders and a top staff, made up of hard-working, knowledgeable and passionate guys who are always there for you, ready to help whenever in need. I know it may sound as a cliché, but there’s no other team as ours, so well-knit and permanently showing an enormous dedication and love for what they do. That’s why we are the Wolfpack; it’s not just a name, it’s a mentality, one that drives us every single day and makes us so successful.