Ian Garrison: “It’s strange and bigger than all of us”

The US National ITT Champion talked about his Deceuninck – Quick-Step debut and the pandemic that led to the cycling season being suspended for an indefinite period.

Everything is well here in Georgia, where the restrictions aren’t as bad as in parts of Europe and we are still able to spend time outdoors. Life is pretty much normal for now in a way. The roads are really quiet, although people are out walking in the nice weather we are having, but the shops are closed and it is quieter.

I was in Europe at our Greek training camp when things started to develop in the US and they were talking about closing the airports and not letting people in or out. Alvaro and I were the two guys from the Americas at the camp and we didn’t want to get stuck in Europe as we saw things were getting worse. We waited a little bit and saw that more and more flights were getting cancelled and we made the call with the team that we needed to go back, and a day later I went from Athens to Heathrow and then to Atlanta. Now that I a home I am having some fairly normal days, doing the rides and work-outs that are part of my program.

It’s quite strange to work without a goal in mind, because we just don’t know when racing will begin again, or what our program will be. I am just grateful that I can enjoy being out on the bike, as I am aware that some people don’t even have that and are stuck inside. It is definitely a shift in mindset but I have plenty to be grateful for. I can work without specific targets – when I am racing, I like to have certain goals but I also really like riding my bike – so I don’t need a reason to ride or train. I am able to switch my brain and just enjoy it.

Leaving Greece was really sad and we were disappointed to leave. I didn’t know what to expect from it with it being a new location, but we got in to the flow things and were really enjoying it. We stayed in a small hotel and were eating together, with the family running the place making us some really good food and looking after us. It was a really nice environment and we didn’t really want to leave. There was a mixed group of riders as far as skill sets and nationalities, with me, Alvaro, Pieter, João, Andrea, and Davide, but it was a great atmosphere as well as tough training.

Getting to know all of the guys on the team has been different to anything that I have experienced, being an American and one of the younger guys in the squad, but with each experience it gets a little easier.

I gave myself this year in my head to get integrated and learn, but even then, I was definitely nervous when we met at the training camp. Like I say though, each time it gets a little better and a little better and I am finding my place in the team. I have spent some time in Girona with Brandon McNulty to train and get used to Europe a little more. The area is great for cycling, with lots of other cyclists around there.

Before this unexpected break, I got to ride La Provence, Ardèche, Drôme Classic, and GP Monseré. I have really enjoyed it so far and I learned a lot from each race. The first time I arrived at the race and went on the team bus I was nervous and I just tried to get all of the details right and do my job to the best of my ability. As far as the race it wasn’t too different, but part of it was not knowing what to expect and seeing how things work, but all of racing boils down to going on your bike and racing. The intensity in the big European races is harder, but racing for a domestique team in the US is different than racing for Deceuninck – Quick-Step. In a way, some things are easier, because the jersey is given a little more room and I can move through the bunch easier, but it is still hard racing. It is hard to describe it as an experience, but it has a different feel. Part of it is a language thing and not always hearing American voices, but there is a different feeling in Europe, that I am sure I will get used to.

The future is hard to predict right now, as we don’t know when racing will begin again. It is a little frustrating, having just got started. But stuff happens and this is much bigger than us or just me. It is very different from saying that I have a knee problem or something, we are all in this together and it is something that none of us have ever experienced before, a challenge that the whole world has to overcome. It is bigger than all of us and it is kind of stupid to say that I am frustrated, but I am looking forward to joining my teammates and racing again, whenever that will be. 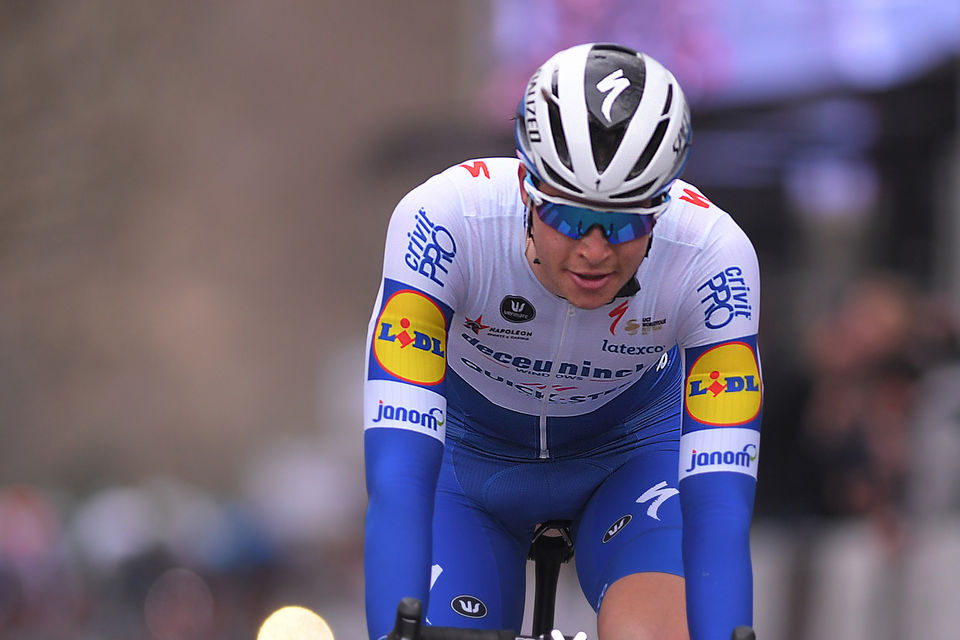