Top 10 for Terpstra and Kittel in Ster ZLM Toer prologue

The team enjoyed a strong start in the Dutch race, placing two riders in the upper part of the overall standings.

A pan-flat 6.4-km long individual time trial was in store for the riders on the opening day of Ster ZLM Toer, a race which saw Etixx – Quick-Step line up a strong and experienced eight-man squad. Returning to racing following a one month break he took after winning two stages at the 99th Giro d'Italia, Marcel Kittel was among the last ones to roll down the ramp and the former two-time ITT World Junior Champion – who before the start met with the kids of the cycling club in Zeeland – had a very solid ride, confirming that these short and intense type of efforts suit him well.

Marcel stopped the clock in 7:32, just 9 seconds behind Jos Van Emden (LottoNL-Jumbo), who took the laurels after defeating two BMC riders, Taylor Phinney and Stefan Kueng. Goes, which was hosting the opening ITT for the second season in a row, had another Etixx – Quick-Step rider among the protagonists. Coming off a strong Criterium du Dauphiné, where he supported Daniel Martin and Julian Alaphilippe, Niki Terpstra showed that he had a good recovery after the hard work and big effort he put in the week-long French race and sloted into 7th place, only a handful of seconds adrift, while in the same time putting time between him and the other contenders for the general classification.

Stage 2 of Ster ZLM Toer will be completely flat, which means the fast men of the peloton will steal the show on Thursday afternoon. Starting and finishing in Oss, the 186-km long course includes two intermediate sprints and a circuit the bunch will cover a couple of times before fighting for the win. 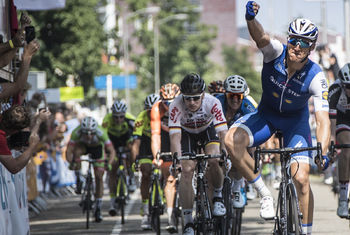