A dynamic race held on a demanding course is in store on Tuesday afternoon.

With the Tour de l'Eurometropole now done and dusted, the peloton turns its attention to Binche-Chimay-Binche/Memorial Frank Vandenbroucke (194.5 kilometers), an event created back in 1911 and held in the Hainaut province.

The riders will take on a hilly and testing terrain which includes several laps of a circuit that is set to lit up the race. The most important segment of the course will come in the last 1500 meters, which include two cobbled section and an uphill finish, where several teams will try to split what should already be a stretched out field and bring their riders in a good position so that they can go for the win.

Tom Boonen, third in last Sunday's Tour de l'Eurometropole, 2014 winner Zdenek Stybar, stagiaires Ivan Cortina and František Sisr, Fernando Gaviria, Iljo Keisse, Nikolas Maes and Davide Martinelli will all be part of a well-rounded Etixx – Quick-Step team capable of adapting to the various scenarios that can occur and leaving its mark on the Belgian race. 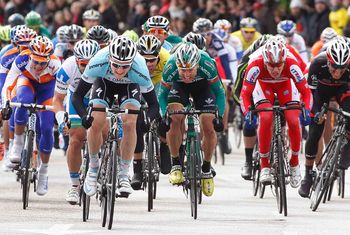