Brabantse Pijl will kickstart the second part of the classics season for the Belgian Champion.

It goes without saying that Philippe Gilbert is so far one of the best riders of the spring: winner of three races, including the 101st edition of Ronde van Vlaanderen and the Driedaagse De Panne–Koksijde, the 34-year-old is on a roll since joining Quick-Step Floors last winter and is determined to keep going at this rate and take advantage of the fine period he's enjoying.

"After De Ronde, I had a couple of days off and spent some time with the family before returning to training. I won't hide the fact that the victory in Flanders brought me huge joy and satisfaction, but that moment is already in the past, as now I'm ready to focus on my next one-day appointments", explained Philippe, only the eighth rider in history to triumph in De Ronde while wearing the Belgian Champion jersey.

His first outing following a very successful first part of the season will be at Brabantse Pijl, a race which saw him emerge victorious twice in the past (2011, 2014): "I'll have more time to reflect on my Ronde van Vlaanderen win once I bring down the curtain over the classics campaign at the end of the month, but at the moment my mind is set on the Ardennes. I'm feeling good after training in the past days, I know the condition is there and I am keen on showing this."

"We're coming at the start in Leuven with a great team and I'm very happy to cross paths with some guys from the team with whom I haven't raced so much this season. It's a pity Julian won't be here and I hope he'll get over this injury and return even stronger", said Philippe of his French teammate who will be sidelined because of a right knee injury.

"Brabantse Pijl is an important race and we will approach it in the same manner we did with the cobblestone classics earlier this spring. Despite being only 200km-long, the race is still a tough nut to crack, with all those climbs and twisty roads, but we hope to get out of it with a good result and cement our position as the best team of the spring", concluded Gilbert ahead of his tenth career start at Brabantse Pijl. 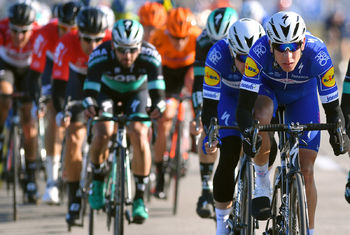