The Czech rider came close to a breakthrough Monument win at the race on which his Belgian teammate left an unforgettable mark.

Zdenek Stybar finished second the 115th edition of Paris-Roubaix, one that will go down in history as the fastest ever – 45.204 km/h – beating the record which until this day was held by the 1964 race. A runner-up also in 2015, the Quick-Step Floors rider was part of the decisive selection that formed on the five-star Carrefour de l'Arbre sector, where he was joined by Greg Van Avermaet (BMC) and Sebastian Langeveld (Cannondale-Drapac).

Stybar was one of the most active riders Sunday afternoon, countering several moves during the race before launching one of his own inside the final hour and splitting the peloton. A rider cut for such a tough and demanding race as Paris-Roubaix, the 31-year-old Czech brought Quick-Step Floors' sixth top 3 finish at the spring classics, following the ones in Milano-Sanremo (3rd), Dwars door Vlaanderen (1st), E3 Harelbeke (2nd), Ronde van Vlaanderen (1st) and Scheldeprijs (1st), thus helping the team cement its spot at the top of the World Tour rankings.

"We supported Tom today. We wanted to give 100% for him, because he deserved that, and even when he was in the chasing group I was still hoping he was going to come back. Only when we got news of him being around 40 seconds behind I started thinking of my chances. All the guys did a wonderful job, taking the initiative and controlling the race from the very beginning, and I assure you it wasn't easy today, as we went full gas from kilometer zero and all the teams made their strategy around us", said Zdenek as he waited to go on the podium.

Going into the final lap on the iconic Roubaix velodrome, Stybar was well-placed and accelerated on the right side at 200 meters to go, but despite doing a great sprint he had to settle for second, behind Van Avermaet, whose kick helped him win by a bike length.

"It's disappointing to finish runner-up, but on the bright side I can be happy with the way I rode and with giving everything today. At one point I had cramps and thought my race was over, but I remained focused and made it to the velodrome. Ok, maybe I could have waited 50 meters more before opening my sprint, but Roubaix is always a bit of a gamble. It's a pity I couldn't get my first Monument victory, but this is just my fifth full road season and I'm confident there will be other opportunities", concluded Zdenek after his second podium finish in three years at the "Hell of the North."

April 9th 2017 will primarily be remembered for being the day on which Tom Boonen bided farewell to the sport. One of cycling's biggest champions and personalities, the 36-year-old made the race on Sunday, attacking on several occasions, stretching out the peloton and giving his every ounce of energy to accomplish his goal of retiring with a fifth Paris-Roubaix in the bag.

Even though that much-desired win eluded him and he finished his last participation at the "Queen of the Classics" in 13th place, 12 seconds down on the first group, Tom was all smiles at the finish, where he was given a hero's welcome by his supporters.

"Last few weeks have been a roller coaster of emotions, but I'm telling you that I wouldn't have imagined such incredible moments this morning. These fans are fantastic and I want to thank them for being by my side in the past 15 years. To be honest, I wasn't thinking of my retirement today, I was all in for the victory. It was only at the 5km-to-go mark that I began thinking these are the last kilometers of my career", said Tom Boonen, a four-time Paris-Roubaix winner, who was cheered outside the team bus by hundreds and hundreds of people who wanted to show their love and appreciation for one of the greatest ever riders to play the game.

After he left Roubaix together with the team whose symbol he has been for a decade and a half, and as the dust settled and the fans headed home, two words continued to reverberate around Compiègne's Avenue Royale, where Boonen made his first appeareance as a former rider: 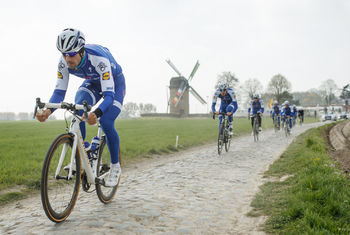 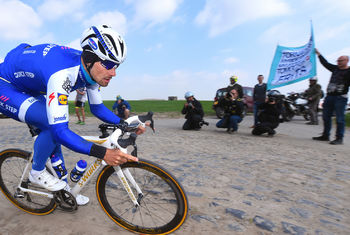 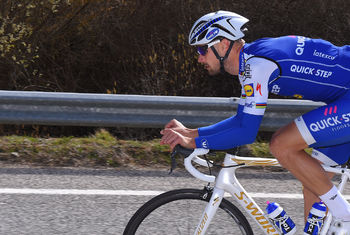 Tom Boonen: “Milano-Sanremo – Beautiful and deceiving as a Fata Morgana” 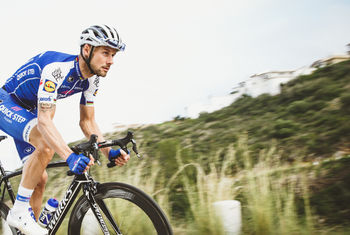 Road To Roubaix: Tom Boonen and the Cobblestones