Daniel Martin concluded Flèche Wallonne on the podium for the third time in his career, after the 2014 and 2016 editions, putting on display the strong form which already brought him in this first part of the season a stage win at Volta ao Algarve and a third overall at Paris-Nice.

Before the riders tackled the legendary Mur de Huy for the third and final time on Wednesday's race, Bob Jungels animated the Belgian Classic, attacking as the peloton crested the iconic climb for the second time and bridging to lone leader Alessandro De Marchi (BMC). After leaving Côte d'Ereffe behind, the 24-year-old Luxembourger put his time trial skills to work and dropped the Italian on the descent, opening a 50-second gap on the bunch.

Bob, who was prominent also during last Sunday's Amstel Gold Race, won by teammate Philippe Gilbert, put in a valiant effort as he gave his best to bring the race to life and make the peloton work hard in order to catch him halfway up the Mur de Huy. On the 1300m-long hill averaging 9.6%, it was a waiting game until 300 meters to go, when David Gaudu (FDJ) made a move, which drew a response from defending champion Alejandro Valverde (Movistar), who then surged clear to take the win.

"It was cold in the beginning and a bit difficult, but towards the end we went with our plan and on the second ascent of the Mur de Huy I attacked. Problem was that too many of the guys behind where still fresh and that made it impossible to go all the way to the line. Overall, I am satisfied with my legs and how I felt, and I take my ride in the Ardennes so far as a good omen for the Giro d'Italia", said Bob Jungels at the finish.

Daniel Martin was the best of the rest at the top of the Mur de Huy, coming one second behind the winner and notching up his sixth top-3 finish at a World Tour one-day race: "This year's Flèche Wallonne was strange, because we had a strong headwind on the Mur and the peloton was very nervous. That made for a messy finish and as a result I didn't have the best position on the climb, where my plan was to take Alejandro's wheel. Although things weren't perfect and I didn't have good legs today, I managed to come back and grab second place at the end of the race, and this makes me look with optimism to Liège–Bastogne–Liège."

Ahead of the Spring's final Monument, Quick-Step Floor – who amassed four victories and seven other podiums at this year's Classics – continue to have a healthy gap, of more than 1700 points, in the World Tour team classification. 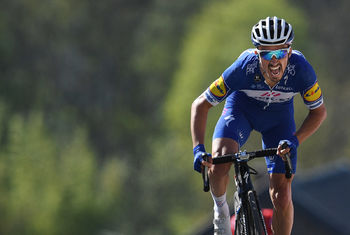 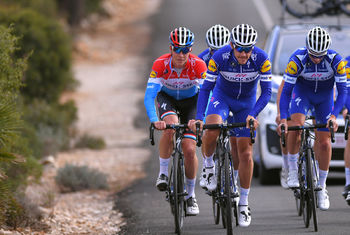 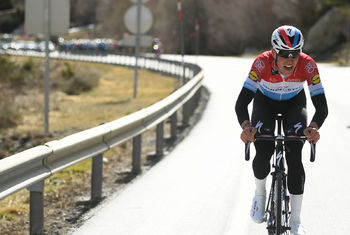