Bob Jungels shrugged off the disappointment of the bad day he had on Blockhaus, the Giro d'Italia's second summit finish, and produced a superb ride in the stage 10 time trial, showing his class and prowess against the clock. A man on a mission, the Luxembourg Champion started the day 12th in the general classification, and showed quickly his intentions, navigating safely through the sharp corners and overcoming the slippery tarmac, before storming to first at the Bevagna checkpoint, which came after the flattest section of the course.

By the time he reached the second split, Bob had already caught and left behind his three-minute man Tejay van Garderen (BMC), putting time into all the riders who rolled down the ramp earlier. Long before the finish, it became clear he'll seize the white jersey from Davide Formolo (Cannondale-Drapac), but this wasn't the goal which Jungels had in mind at the start of the day. Instead, he was keen on making up time after Sunday's stage and cracking again the top 10 overall.

On the rolling roads to Montefalco, which featured 5% gradients, Bob dug deep, but still looked completely in control at all times, stopping the clock in 51:33, enough for third at the end of the day, behind new race leader Tom Dumoulin (Team Sunweb) and Geraint Thomas (Team Sky), but way ahead of defending champion Vincenzo Nibali (Bahrain-Merida) and Blockhaus winner Nairo Quintana (Movistar).

"It was a really hard time trial. Yesterday, when we did the recon, it wasn't so windy, so I had to take also this into account. It was tempting to go very fast from the start, but that would have meant to lose time by the end. I managed to do a good race and I'm happy to be on the podium, it's a fantastic feeling", said Bob, who finished in the top 3 of a Giro d'Italia stage for the second time in his career.

The Luxembourger moved to sixth place in the general classification and also put minutes into his white jersey rivals, Formolo, Jan Polanc (UAE Team Emirates) and Adam Yates (Orica-Scott), so it came as no surprise that at the end of the stage Bob was beaming with confidence: "This result shows that what happened two days ago was just a bad day, not a decrease of form. The race is just starting and my goal is to finish again in the top 10. It would be nice to win also the white jersey, but at the moment I'm not thinking about this, I'm just taking it one step at a time." 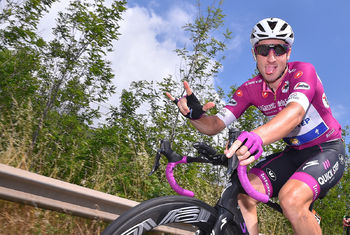 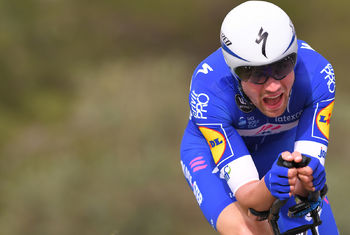