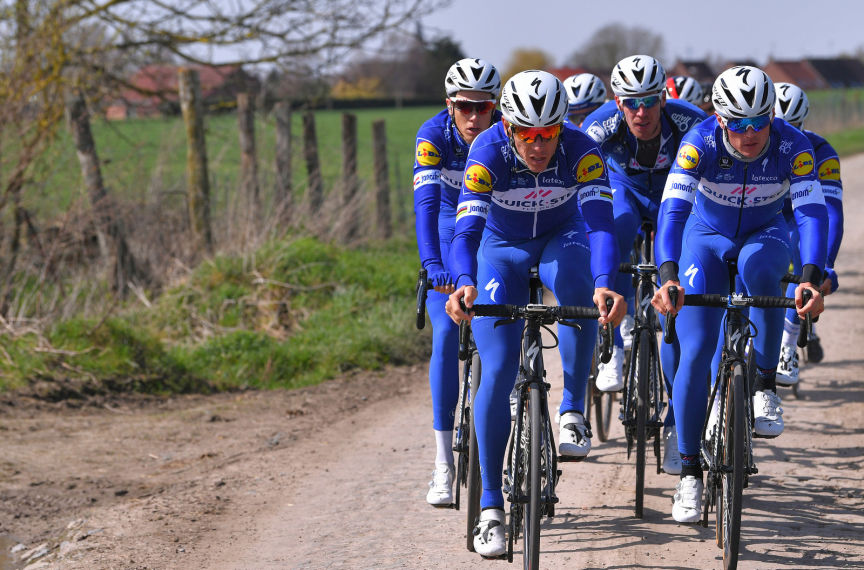 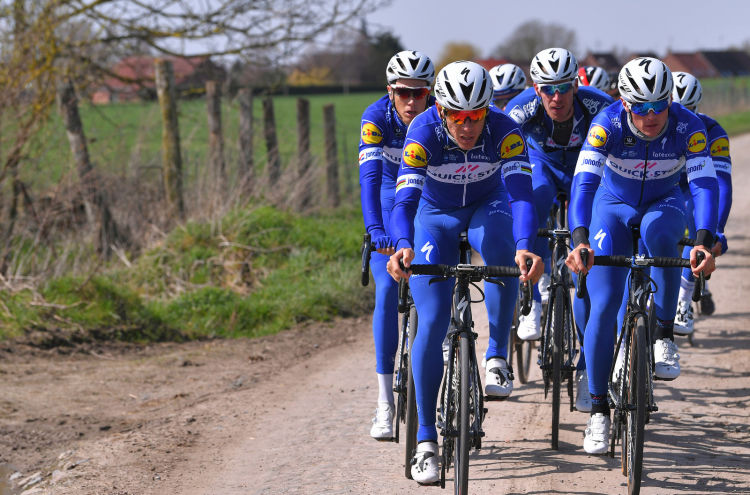 Seven flat stages, three mountain top finishes, two time trials and a pavé stage, all these are on the menu of the 105th edition.

Winner of an astounding 43 races in 2018 and current World Tour leader, Quick-Step Floors will line out at the start of the Tour de France after an amazing run of success in the first part of the season, with a strong and experienced team capable of fighting for victory on any kind of terrain and at the same time being a factor in the general classification.

Julian Alaphilippe, Tim Declercq, Fernando Gaviria, Philippe Gilbert, Bob Jungels, Yves Lampaert, Maximiliano Richeze and Niki Terpstra, riders who between them have won twenty races since the beginning of the year, will carry the flag for our squad at Le Tour, which takes place between 7-29 July.

Now in his fifth pro season, Julian returns to the Tour de France after a knee injury prevented him from taking part in last year's edition and comes here with five victories under his belt, including the prestigious Flèche Wallonne. The pocket-rocket climber has been one of the stand-out riders of the Spring Classics, alongside Liège–Bastogne–Liège victor Bob Jungels and Niki Terpstra, winner of both E3 Harelbeke and Ronde van Vlaanderen.

With the guys we have selected for the Tour, we bring a perfectly balanced squad consisting of younger riders and more experienced road captains

The only Quick-Step Floors rider on the roster to have won a Tour de France stage, Philippe Gilbert will be at the start in Vendée two weeks after coming runner-up at the Belgian Championships, where Yves Lampaert – who'll make his Grande Boucle debut – soloed to an unforgettable victory. Tim Declercq will add horsepower to a squad which will see experienced lead-out man Maximiliano Richeze guide Fernando Gaviria as the prodigious Colombian, winner of seven races so far in 2018, will fight for a maiden Tour de France stage victory. 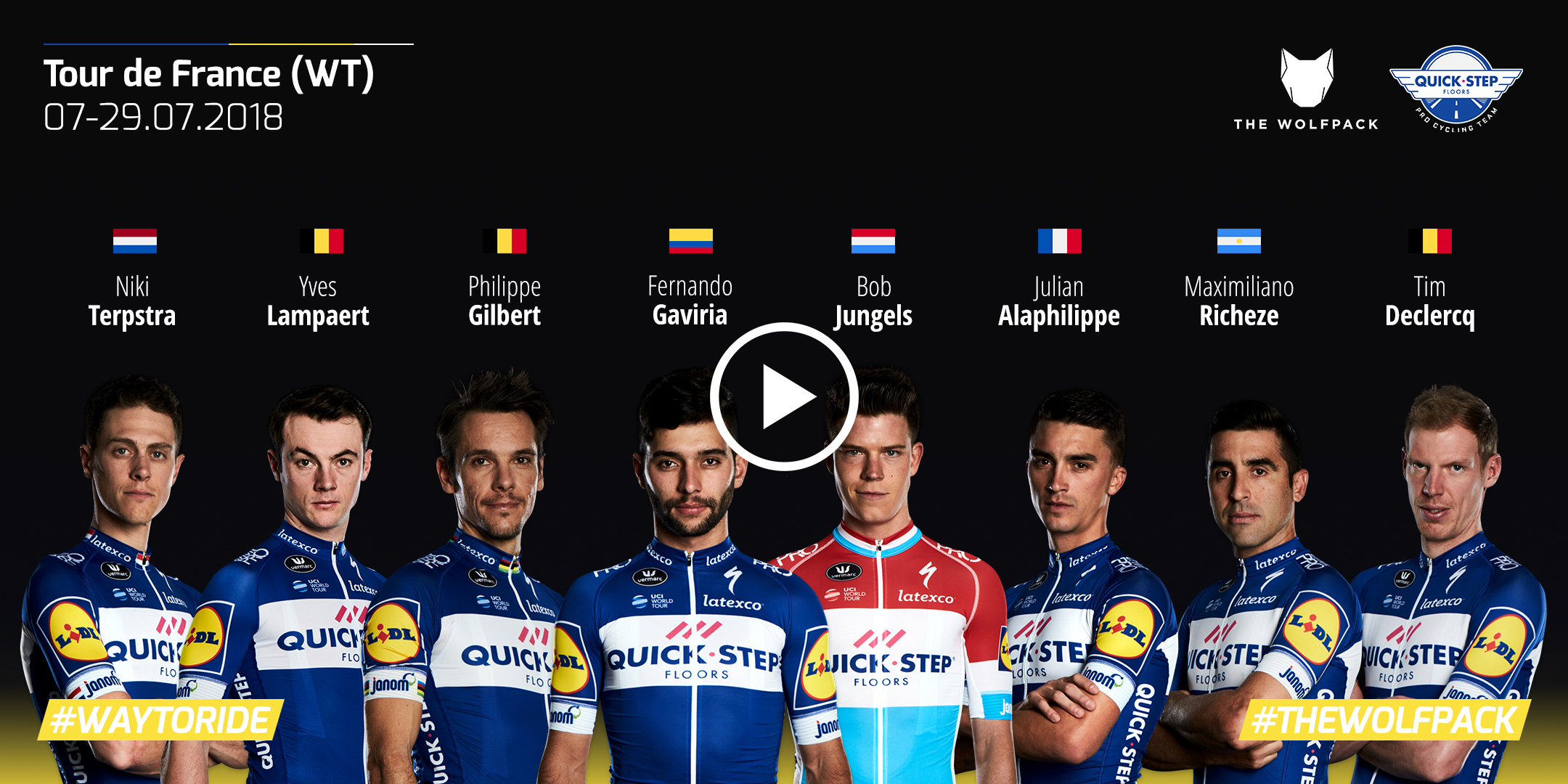 A third of the race's stages are suited to sprinters, who'll have plenty of opportunities to go for glory and the iconic green jersey, but there will be more than this to the Tour de France, which also puts on the table a testing 35.5km team time trial which will shape the general classification after just three days, a stage jammed with the treacherous cobblestone sectors of northern France, several days for puncheurs, three summit finishes (La Rosière, Alpe d'Huez, Saint-Lary-Soulan) and an individual time trial scheduled just 24 hours before Champs-Élysées.

Sports director Tom Steels, a multiple stage winner at Le Tour, made an analysis of the Quick-Step Floors team that will take on the three-week race: "With the guys we have selected for the Tour, we bring a perfectly balanced squad consisting of younger riders and more experienced road captains. Common for them all is their world-class quality as bike riders, which they have proven countless times by being key players in the team's successes."

"Niki and Phil are two big champions whose experience we will rely on when things get hectic and on the flat stages, in the TTT and on the cobblestones. They are not only leaders and winners, but very good team players, who can sacrifice themselves for their teammates, displaying that genuine team spirit which have led to so much success for our squad. The same goes for Tim and Yves, who will be important forces on the flat and cobbled terrain. Both have proven their quality in a Grand Tour last year and arrive full of confidence and motivation after a successful outing at the National Championship in Belgium."

Alaphilippe and Jungels – a duo who shared the spoils at this year's Ardennes Classics – are expected to be in the mix once the road begins to rise: "For Bob and Julian, it will be a second meeting with the biggest race in the world. After two successful Giro campaigns, where he won the best young rider classification in both 2016 and 2017, Bob returns to the Tour with a goal to see how far he can go in GC. He has recovered well from the first part of the season and is ready for the challenge. The same goes for Julian, who was sidelined last year due to an injury. As one of the most versatile riders in the peloton, we can expect a bit of everything from this talented young Frenchman and we look forward to seeing him racing a Grand Tour on home soil again."

...the level of the Tour is different with the presence of the best sprinters, lead-out men, domestiques and helpers in the world

"It is no secret that we aim to take a victory with Fernando, who will debut in the Tour as well. He amazed the cycling scene last year by winning four stages and the cyclamen jersey at the Giro d'Italia, but the level of the Tour is different with the presence of the best sprinters, lead-out men, domestiques and helpers in the world. Richeze will be extremely important for Fernando, especially in the final kilometers, where he will use his experience and power to pilot Fernando into the best possible position to launch his sprint, like they have successfully done in the past years", concluded Steels, who will guide the team from the car, together with Davide Bramati, Brian Holm and Wilfried Peeters.