A quiet day at the Volta a Catalunya

The breakaway survived on the opening stage of the World Tour event.

The town of Calella, where Alvaro Hodeg picked up his first World Tour win in 2018, played host again to the start of the Volta a Catalunya, the fourth-oldest stage race in the world. If the parcours of last year’s opening stage favoured the sprinters, this time around the baroudeurs where the ones who found the 163.7km course much to their liking, as it featured five classified climbs – Port de Collsacreu twice, Port de Santa Fe del Montseny, Alt El Muntanya and Coll Formic – which took the sting out of the sprinters’ legs.

A breakaway of six rolled early, ensuring themselves a nice buffer of five minutes, which on the penultimate ascent was cut back to three minutes. A few moments later, Thomas De Gendt (Lotto-Soudal) attacked his fellow escapees and rode alone to the finish, taking both the stage win and the leader’s jersey, ahead of Maximilian Schachmann (Bora-hansgrohe) and Grega Bole (Bahrain-Merida).

Enric Mas, who is back in action for the first time since finishing last month’s Volta ao Algarve just outside the overall podium, safely concluded in the bunch, less than three minutes later, after being shepherded throughout the day by his Deceuninck – Quick-Step teammates. The young Spaniard, who is making his third consecutive presence at the Volta a Catalunya, will hope to be in the mix later in the week, on Vallter 2000 and La Molina, the two mountain stages of this 99th edition. 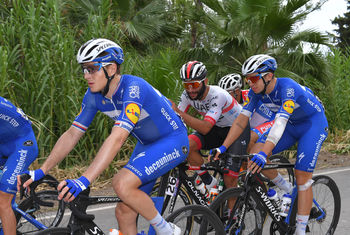 Deceuninck – Quick-Step to Volta a Catalunya 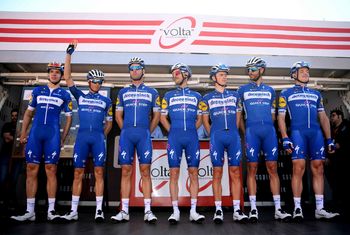