The Argentinean Champion escaped a crash-marred finale and notched up the team’s fourth podium at the race.

Stage 14 of the season’s third Grand Tour was one of the quietest of the entire race, that is until the last kilometer, when things got turned upside down and panic began spreading in the pack. The day’s action properly kicked off some 20 kilometers into the stage, when six riders joined hands and skipped clear to form a breakaway, which at no point could take their buffer over two minutes.

Several teams sent delegates to the front of the bunch to control the gap, Tim Declercq resuming his usual pace-setting duties for Deceuninck – Quick-Step and pushing a steady tempo behind the escapees, whose adventure came to an end after the day’s sole classified climb (Alto La Madera – 8km, 3.5%). With the sextet out of the way, the sprinters’ teams intensified the rhythm and found enough space to bring their leaders into position, and it was the Wolfpack who ultimately stormed to the front with Zdenek Stybar, who guided Max Richeze and stage 4 winner Fabio Jakobsen under the flamme rouge.

That was where a large crash decimated the bunch and derailed the expected mass gallop in Oviedo, the Cantabrian city which was hosting its first stage finish in 32 years. One rider tried to take advantage of the chaos, shooting out of the pack on the stinging 8% drag to the line, and Richeze was the one to respond and shut down the slender gap, before Sam Bennett (Bora-hansgrohe) came across and sailed to victory.

36-year-old Max, who nabbed his first stage podium since 2013 in a Grand Tour, took us through the hectic closing kilometer of Saturday’s stage: “The final was really hard, but we tried to control it and set up Fabio for the win; unfortunately, the last 500 meters were really steep and he got distanced. When one guy attacked, I tried to follow and even passed him, but another rider was faster today. On the other hand, we’re still one week away from Madrid and we will continue to try.” 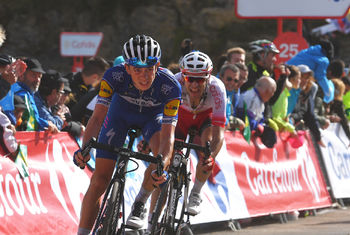 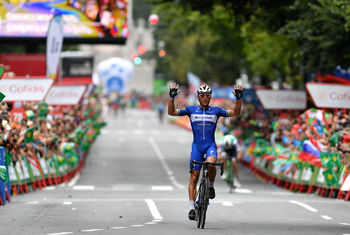 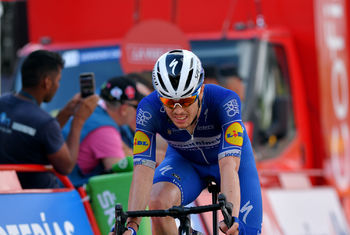 Vuelta a España: Cavagna shows grinta in the break 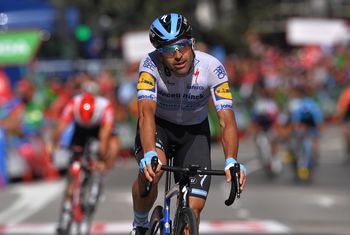