The 24-year-old has five seconds over his closest rival in the standings.

Overall leader Enric Mas faced a flurry of attacks on the final climb of the penultimate day of the Chinese race, but remained cool as a cucumber, and helped by a strong team, shut down all those moves that came thick and fast, shattering the peloton with 40 kilometers to go, getting closer to sealing the first GC win of his career.

At 212.2 kilometers, stage 5 between Liuzhou and Guilin was the longest of the Tour of Guangxi, and the Wolfpack assumed responsibility tapping out a solid rhythm at the front of the peloton behind the four men who decided to spend their day in the break, establishing a five-minute maximum advantage. Iljo Keisse and Petr Vakoč made sure of eroding the gap and bringing back the quartet, before Mikkel Honoré took the reins when the road started to rise and cracks began to appear in the back of the pack.

The main attack on the 3.1km climb came from Daniel Martinez (EF Education First), who opened a gap that Enric Mas easily shut, showing again effortless power. Joined by Vuelta a España stage winner Rémi Cavagna, the red jersey wearer asserted control over the race, which came back together on the descent, where a large chasing group managed to bridge across. A numerous Decueninck – Quick-Step delegation comprising Honoré, Cavagna and Pieter Serry protected the Spaniard and put in the workload until the closing kilometers, where the sprinters’ teams took over.

For the third time in five stages, Davide Martinelli posted another top 10 finish, coming home eighth, as Fernando Gaviria (UAE Team Emirates) sailed to victory. Mas rolled over the line safely tucked inside the bunch, retaining the red jersey thanks to another impressive effort of his teammates, and is now in prime position to take it home, together with the white jersey. 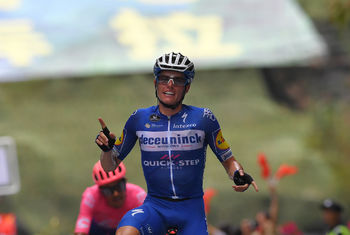 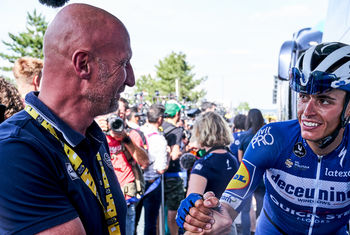 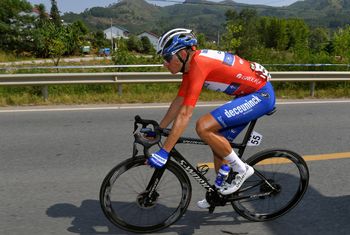