The fourth reigning Tour de France KOM champion in history to conquer “La Primavera” looked back on his perfect day on the Italian Riviera.

One year ago, overcome with emotion, a delighted, ecstatic, thrilled and exultant Julian Alaphilippe stopped for a second moments after crossing the finish line and caught his breath, before letting out a huge roar of joy that rang in the ears of the large and boisterous crowd that lined both sides of the Via Roma.

The 26-year-old Frenchman was now a Monument winner, after 291 long kilometers spiced up by an insanely exciting finale, that saw him cap off a superb teamwork of the Wolfpack, who patrolled the front of the peloton from the beginning and set him up for victory.

It was one of Julian’s and Deceuninck – Quick-Step’s highlights of another unforgettable season, so it was only right that ahead of this weekend, which had originally scheduled the 111th edition of La Primavera, we talk with the reigning champion about his memorable triumph at the season’s first Monument.

Julian, let’s go back to the morning of 23 March 2019. What were your thoughts at the start of the race?

To tell the truth, I was quite relaxed. Ok, there was a bit of stress, but the kind you have before any race. Other than that, I was confident and motivated, as I knew I was going into the race on the top of my shape and surrounded by a team committed to helping me achieve my objective.

As always with Milano-Sanremo, the final 40 kilometers were the most nervous. Did you feel the tension building up as the Poggio approached?

It was my third time in Milano-Sanremo and what I had learned from the past participations was that it’s a long race and you have to remain calm for the final, which is always explosive. Things became hectic at the front as early as the Cipressa, but I was protected at all times by my incredible team, who made sure I was in the best position at the start of the Poggio.

How important was it to be able to rely on such a great team, who controlled the race and pushed a hard tempo until the moment of your attack?

It was one of the keys of my victory.

Their spectacular workload made the difference and allowed me to asses my rivals on the Poggio, while they kept the tempo high and prevented any moves until the moment I felt it was the right time to attack. 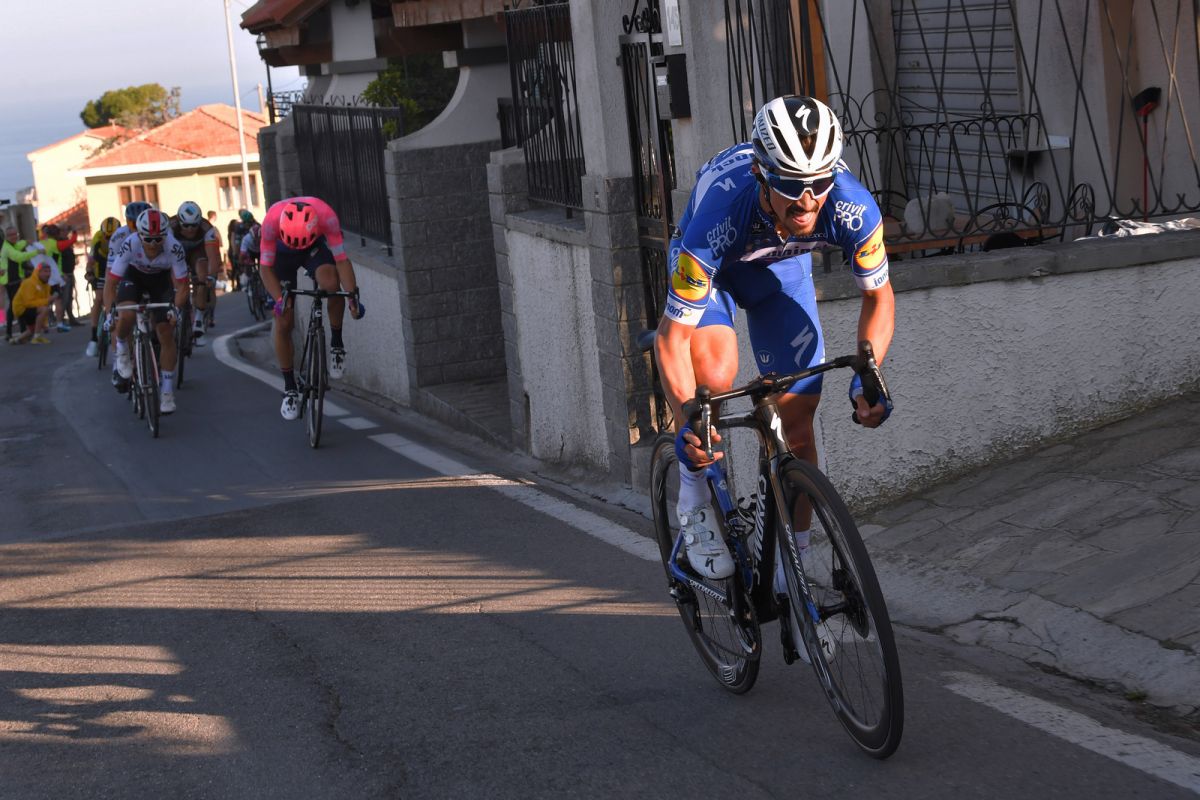 Your acceleration forced an important selection, only a small group arriving on the Via Roma. What went through your mind as it seemed that it will come down to a reduced sprint?

When I attacked inside the last kilometer of the climb, I tried to make a difference and looking over my shoulder as I crested the top, I could see that only a couple of riders were still left, but they were all strong guys, big names. So, on the downhill I just tried to recover and keep my focus, knowing I had to do a perfect sprint in order to take the victory.

Did winning a bunch sprint in Tirreno-Adriatico just a few days before Sanremo give your morale a boost for this scenario?

That victory augured well. Coming into Milano-Sanremo I knew I was in good shape, with a total of three Italian wins at Strade Bianche and Tirreno-Adriatico under my belt, so I’ve got to say I had a bulletproof confidence when it became clear the win will be played out in a sprint.

Take us through those last 200 meters.

The race was full gas and very difficult to control after the downhill. Everybody was looking at each other, waiting for the sprint and turning the final into a very tactical one. Victory is never as simple as it looks from the outside and I knew from the 2017 edition that you have to be smart, stay calm and do a good effort at the right moment as the adrenaline is going up. When Mohoric started the sprint, I followed him and when we entered the final straight, I stopped thinking and just pushed as hard as I could on the pedals.

Once I saw the finish line and knew that I won, I could barely contain myself.

Your palmares boasts several Classics, Grand Tour stages, and stage races. Where do you rank your Milano-Sanremo victory?

It’s really complicated to choose, because all these wins are all special and they all mean something to me. On the other hand, to take my first Monument at Milano-Sanremo – the longest and maybe most difficult to read race of the year – is something I will never forget. On that day, with the help of a superb and outstanding team of whom I am very proud, I turned my dream into reality, so I can say it’s my most beautiful victory to date.