Consistency pays off for the Irish Champion.

Sam Bennett became the first Irish rider in more than three decades to lead a Tour de France classification, after racking up 40 points during Wednesday’s stage 5 from Gap to Privas (183 kilometers). A man on a mission at the start of the day, the 29-year-old showed his intentions early, at the intermediate sprint, where a masterful lead-out of Michael Mørkøv left him in a perfect position to take maximum points in L’Épine.

Going into the final kilometers of this stage – which featured narrow roads and a series of roundabouts – Bennett remained in the wheel of his experienced lead-out man as he moved through up the peloton before the uphill drag to the line. Despite having to come from behind, Sam unleashed a huge acceleration that saw him gain several positions and conclude the stage won by Wout Van Aert (Jumbo-Visma) in third position.

The points picked up in Privas, combined with those at the intermediate sprint, helped the Irish Champion climb into the lead of the green jersey standings for the first time in his career, a performance which gave him a lot of satisfaction, despite missing out on the stage win.

“It was a really hectic sprint, and to be honest, at three kilometers to go I felt that I didn’t have the legs to sprint anymore. The final was really difficult, I could feel that as we were approaching the line. I was focused today on taking the green jersey and having it and following in the footsteps of Sean Kelly and Stephen Roche feels amazing. I am delighted and proud with it and want to enjoy this moment and continue fighting for green.”

Unfortunately, Julian Alaphilippe lost the yellow jersey at the end of the day, after the jury penalized him 20 seconds for taking a bottle inside the last 20 kilometers of the stage. The only Frenchman to have won a stage so far at this edition, Julian sits now in 16th place, 16 seconds behind Adam Yates (Mitchelton-Scott), the race’s new leader. 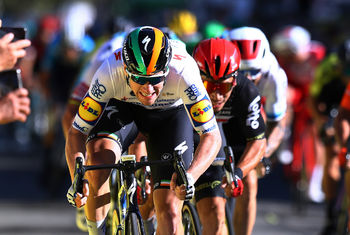 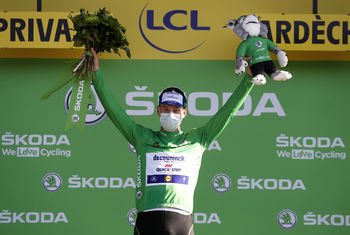