He came, he showed panache, he conquered, he celebrated. Julian Alaphilippe couldn’t have dreamed of a better Tour de France start, as he surged to victory on the Côte de la Fosse aux Loups after a tremendous effort of his Wolfpack teammates, who protected him during the chaotic and nervous stage 1 from Brest to Landerneau before giving him the perfect launch pad to a fourth win in the rainbow jersey.

“This is such a special victory I can’t find my words to tell you how I feel. First and foremost, I want to say a big thank you to all my teammates for taking care of me today and showing an amazing team spirit. I was involved in that first big crash, but with their help I made it back. They believed in me, worked hard the entire day and I am happy I could repay them”, said an elated Julian after becoming the first Frenchman in two decades to win on stage 1.

The 108th edition of the Grande Boucle rolled out from Brest for the fourth time in history and took in six classified climbs and around 3000 vertical meters for what was one of the hardest opening days at the race in recent history. As soon as a breakaway formed, Deceuninck – Quick-Step posted Tim Declercq at the front of the peloton, and “El Tractor” duly kept the escapees in check, before reeling them in one by one.

Davide Ballerini was next to move to the front, making it really hard in the bunch, before Kasper Asgreen joined in with the last ascent in sight. Alaphilippe stayed in the wheel on the Ronde van Vlaanderen champion until with 2.5 kilometers to go, when Dries Devenyns took over and upped the tempo as the gradient was becoming stiffer, setting up the 29-year-old for one of his trademark panachetastic attacks. 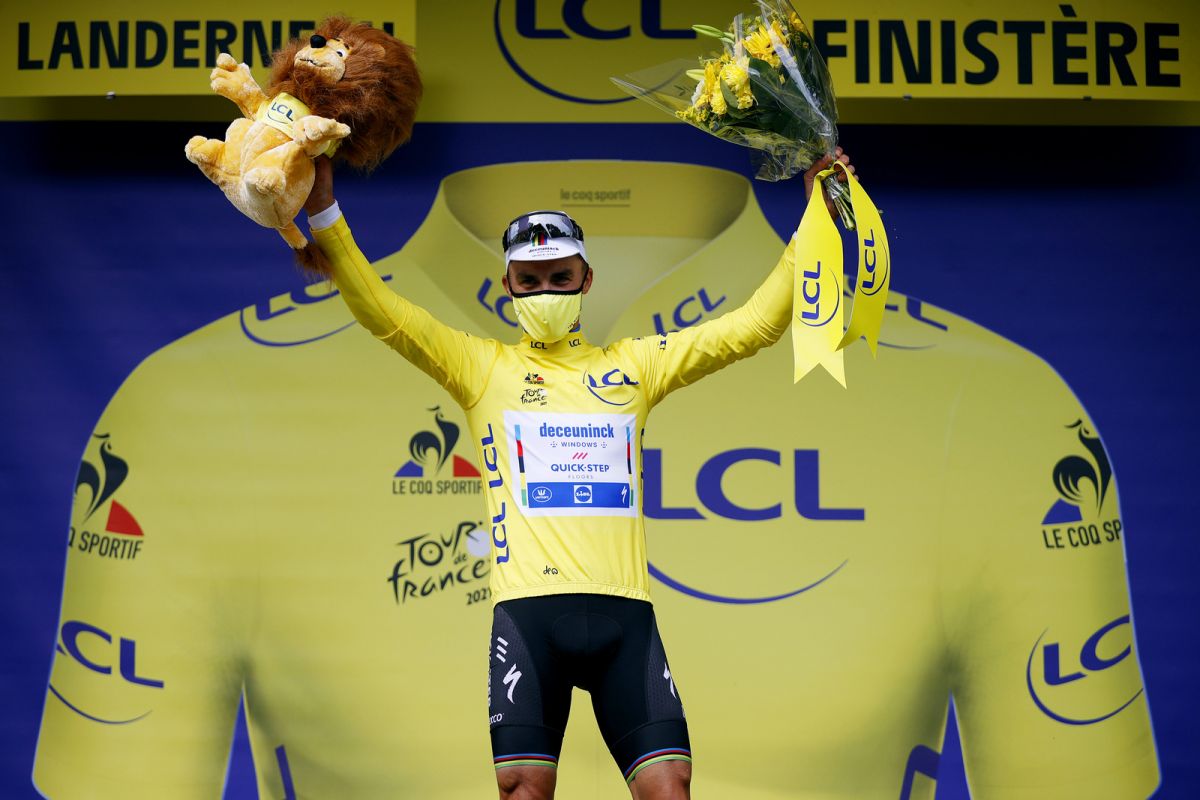 Julian stormed away from the field and quickly gained ground in a move reminiscent of his attack at last year’s Worlds in Imola. This enormous acceleration on the hardest part of the climb brought him a handful of seconds under the flamme rouge, and without looking back, the man who delighted an entire nation two years ago continued his sumptuous move and arrived at the finish well clear of the chasers. As he crossed the line, he celebrated his sixth Tour de France stage success, one which he dedicated to his son Nino, born last week.

“It’s incredible to take the victory and the yellow jersey after the birth of my son. If you would have told me before the start this will happen on the opening stage, I wouldn’t have believed it. I came into the race motivated and with the goal of getting a win and wearing yellow again at some point, and I’m happy I achieved it so early.”

“Today, the plan was to make it a tough race for the fast men, so I asked the guys to ride full gas from the very beginning. Then, in the finale, Kasper guided me on the first ramps of the climb before Dries came on the left, which was the signal for me to follow him. I did just that and when he finished his effort I just took off. I decided to go all out and as soon as I noticed a small gap, I continued to pull hard and give everything. Now I’m hearing that I racked up the 100th Grand Tour stage win in the history of this fabulous team and all I can say is that I am proud to be part of this amazing achievement”, said just the fifth World Champion in history to claim the victory on the first day of the Tour de France. 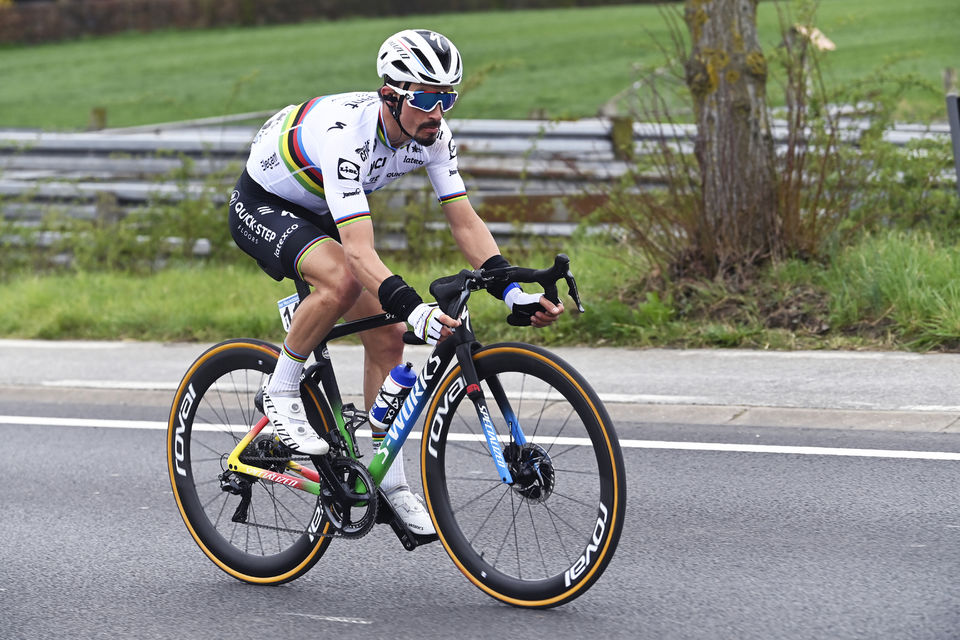 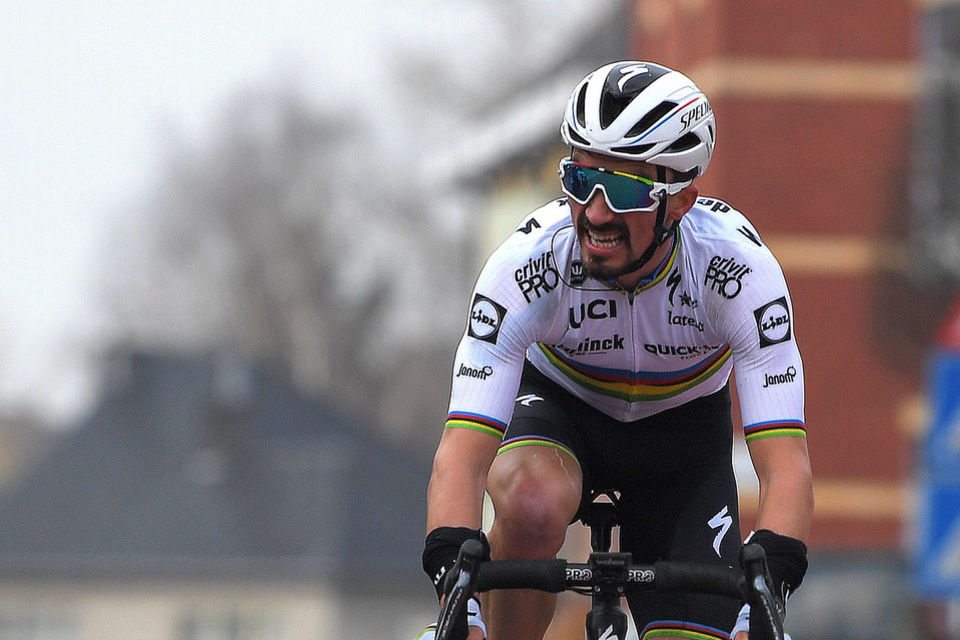 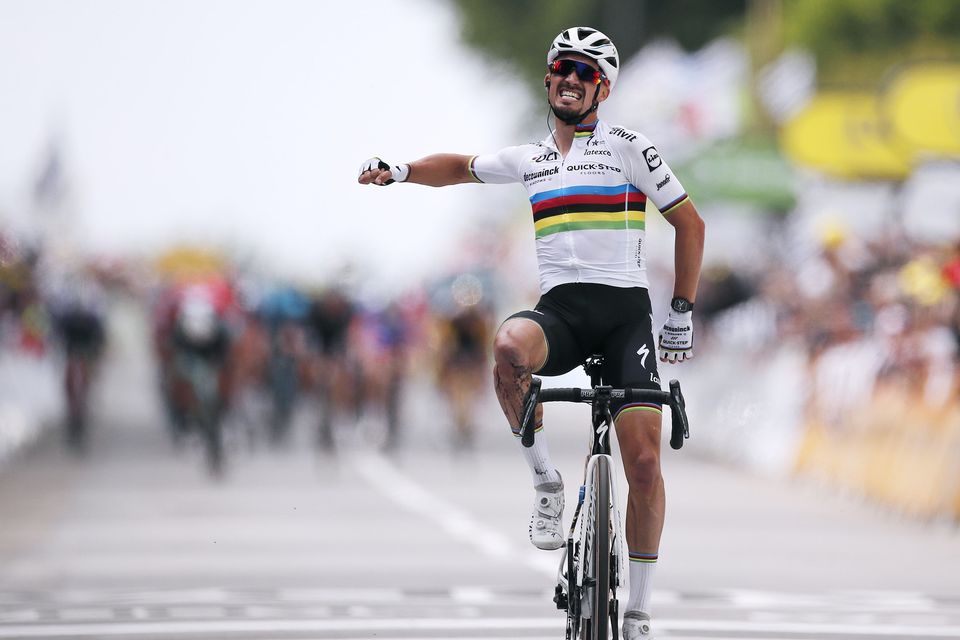