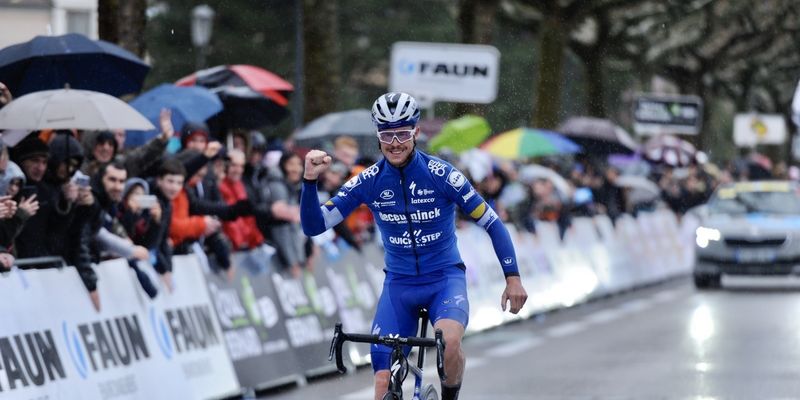 A formidable display of aggressivity and panache of the Frenchman netted the team’s 13th success of the year.

Rémi Cavagna became the seventh different Deceuninck – Quick-Step to notch up a victory this season, after a bold breakaway which saw him attack from the gun, drop his companions with 50 kilometers to go in inclement weather conditions and soldier on all the way to the finish in Valence, where he won by a huge margin of three minutes over the closest chasers.

“Today was chilly and wet, thus adding to the difficulty of the race, but I felt good, gave everything and did my own race, and I’m really happy of how things panned out. I love breakaways, it motivates me a lot when I’m at the front, and to take a victory for the Wolfpack so early in the season feeds my confidence”, an elated Rémi said after his sumptuous show of strength on home turf.

Grey clouds and cold temperatures greeted the peloton at the start of Saturday’s Ardèche Classic (184.4km), which soon was battered by the rain, making things even more complicated and whittling down the peloton, several riders deciding to call it a day in the first hour of the race. At that point, Cavagna – who had launched the first attack of the day – was already at the front with four other guys, enjoying a four-minute lead, that at least on paper, looked manageable for the bunch.

As always when going into the break, Rémi had other plans and was determined to not go down without a fight, setting the tempo unfazed by the short but stinging climbs and putting in an awesome amount of effort which helped the five-man group extend their advantage to six minutes midway through the race. Sensing an opportunity was up for grabs, the 24-year-old pushed the pedal to the metal again, only Ben King (NTT Pro Cycling) being capable of joining him, but not even this pleased the Deceuninck – Quick-Step rider, who threw caution to the wind and went again with 50 kilometers to go, opening up a small gap.

What were ten seconds turned into one minute on Côte de Toulaud, and the advantage kept creeping out over the up-and-down course, while from behind, several riders got out of the saddle, stirring things in the peloton, where cracks began to appear. For his part, Cavagna continued to build time, powering over Saint-Romain-de-Lerps and Val d’Enfer climbs, not even the wet descents being able to slow down the “TGV of Clermont-Ferrand”, who remained in beast mood until the finish in Valence. There, he was greeted by a big round of applause as he sealed his fourth career victory in the race two more Deceuninck – Quick-Step riders – Mikkel Honoré and neo-pro Andrea Bagioli – concluded in the top 10.

“I know these two races, but to be quite frank, I initially wanted to try something on Sunday, because I thought today would be too hard for me. I attacked on the first climb because I didn’t want to spend the entire race in the bunch with all this rain”, Rémi explained the reasons behind his move. “I felt strong, did my turns and then dropped the others. Once I got a gap, I kept a solid tempo and I remained confident that I was capable of going all the way to the line, especially after my break in La Provence, when I got caught only on the Ventoux. Ok, the final was different here, but still very tough, so to pull it off after such a long breakaway feels great!” 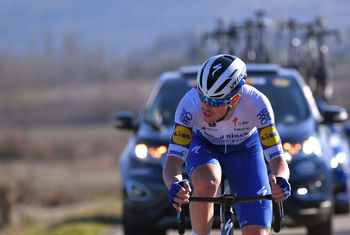