Mauri Vansevenant dazzled Wednesday afternoon at the 84th edition of Flèche Wallonne, a race won in the past two years by Julian Alaphilippe, as he deployed his superb climbing skills and amazing fighting spirit. In the absence of the newly-crowned World Champion, our team took on a different approach, but remained offensive, sending Mauri on the attack immediately after the start was given in Herve.

Part of a four-man breakaway that enjoyed a maximum lead of nine minutes, the 21-year-old neo-pro dropped his companions on Côte d’Ereffe, the eighth climb of the day, and powered through the pain, as he emptied himself with each kilometer ticked off. Over the top of Côte du Chemin des Gueuse – the penultimate difficulty of the day – last season’s Giro della Valle d’Aosta winner showed the same unwavering tenacity and stretched out his advantage to around 40 seconds, showing to his chasers that he wasn’t prepared to go down without a fight.

Fortune was not on his side, as a crash at speed in a corner with just four kilometers to go sent him into a bush. Mauri was quickly back on his bike and continued to soldier on, but the momentum was gone and the peloton caught him just 400 meters from the bottom of the Mur de Huy. Another neo-pro, Andrea Bagioli, finished as Deceuninck – Quick-Step’s best placed rider, as Marc Hirschi (Sunweb) took the win after an attack inside the final 50 meters.

“I felt very good today, the legs were there and I started with a lot of confidence, despite making my first presence in a World Tour Classic. I worked in the breakaway, and then, when I realised that the gap was rapidly coming down, I accelerated and continued by myself. The gap wasn’t big, but I believed in myself, so I gave it my best”, Mauri explained at the end of Wednesday’s race. “I could still tap a good rhythm in the last kilometers, but then I entered in that corner with too much speed and I crashed immediately. I got up and then on my bike and continued to push hard, but it was over, as I lost a big chunk of my advantage. It’s a pity, because I am confident that without that incident, I could have fought for a good result on the Mur de Huy.” 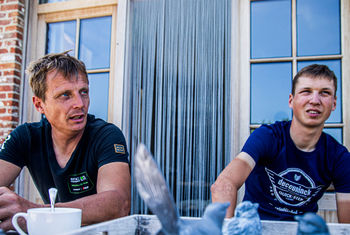 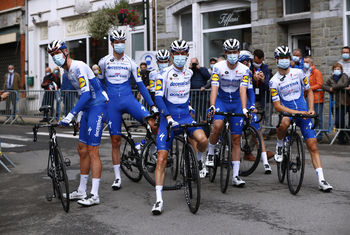