João Almeida retained the overall lead after a miserable 204km stage, which featured heavy rain and strong winds that shattered the peloton with more than 70 kilometers to go, leaving around 25 riders in the maglia rosa group for the last part of the day. Not just the horrible weather conditions made for a brutal Thursday afternoon, but also the parcours, which numbered five tough classified climbs spread along the 204km route around Cesenatico.

Deceuninck – Quick-Step rallied again around the young Portuguese, keeping him out of the wind and fending off the pressure applied by some teams more than 100 kilometers from the finish, when they upped the tempo and significantly reduced the field. Another selection was made on the San Giovanni in Galilea climb, as several riders got caught out, but Almeida was present and remained calm and composed, having with him three companions – Mikkel Honoré, James Knox and Fausto Masnada – who set a moderate tempo and guided the 22-year-old over the top of the hill and on the wet descents.

Almeida eventually concluded the stage in ninth place – some eight minutes down on Jhonatan Narvaez (Ineos), who took the victory from the day-long breakaway – and nabbed his sixth top 10 finish since the start of the race. The Grand Tour debutant tops the general classification by 34 seconds, but leads also the youth standings, and on Friday will don the iconic maglia rosa for the tenth consecutive day.

“I have to say that it was another hard stage. We spent almost six hours in the saddle, had a lot of rain and low temperatures, but at the end of the day we retained the pink jersey, which is the most important thing. Despite everything this stage threw at us, I was very calm because I knew there was such a strong and committed team around me, an amazing bunch of guys who gave everything out there. Having such a great squad around me motivated me to do my best and keep the jersey for as long as possible. I never thought I would wear it for so many days when I pulled it on for the first time and I’m happy that I could do it for more than a week”, explained João after Thursday’s stage. 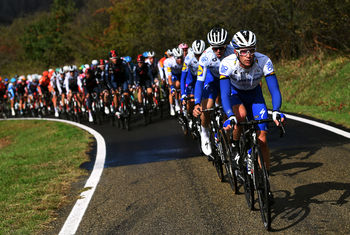