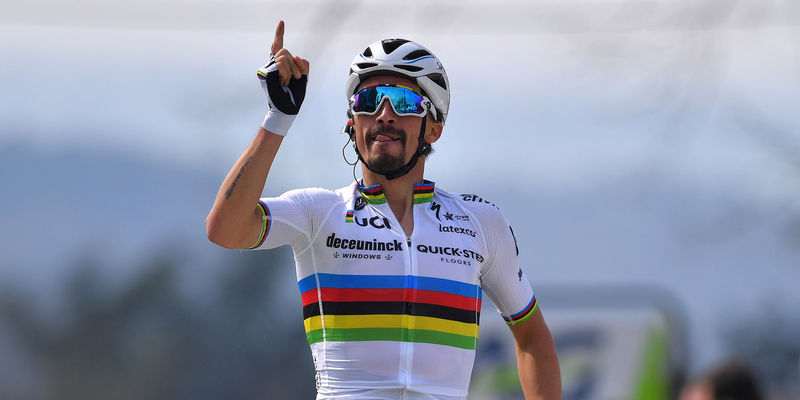 Julian Alaphilippe got his third victory in the rainbow jersey, and his biggest since becoming World Champion, after one of the best and most thrilling finishes in Flèche Wallonne history. In doing so, the 28-year-old became one of the few riders in history, and the first since 2010, to win the Belgian Classic with the iconic arc-en-ciel jersey on his shoulders.

On the menu of Wednesday’s 85th edition: 193.6 kilometers, almost 3000 vertical meters and twelve climbs, one more than last year. As usual, the Mur de Huy was the main attraction of the race, featuring three times on the course that this year saw the start return to Charleroi. Soon after the field left behind the neutral zone, attacks began coming, but it took nearly one hour for a breakaway to form, and when this happened, eight riders were at the front, with an advantage that at its height reached five minutes.

Deceuninck – Quick-Step were one of the teams to assume pace-making duties in the peloton, posting Josef Cerny at the front before Mikkel Honoré and Mauri Vansevenant made their way towards the head of the bunch and took over as soon as the group entered on the circuit, chewing into the escapees’ gap. The biggest attacks of the day before the final climb came with 11 kilometers to go, on the penultimate hill, but they were all suppressed by a strong James Knox, who continued to remain in control of things on the descent taking to Mur de Huy. 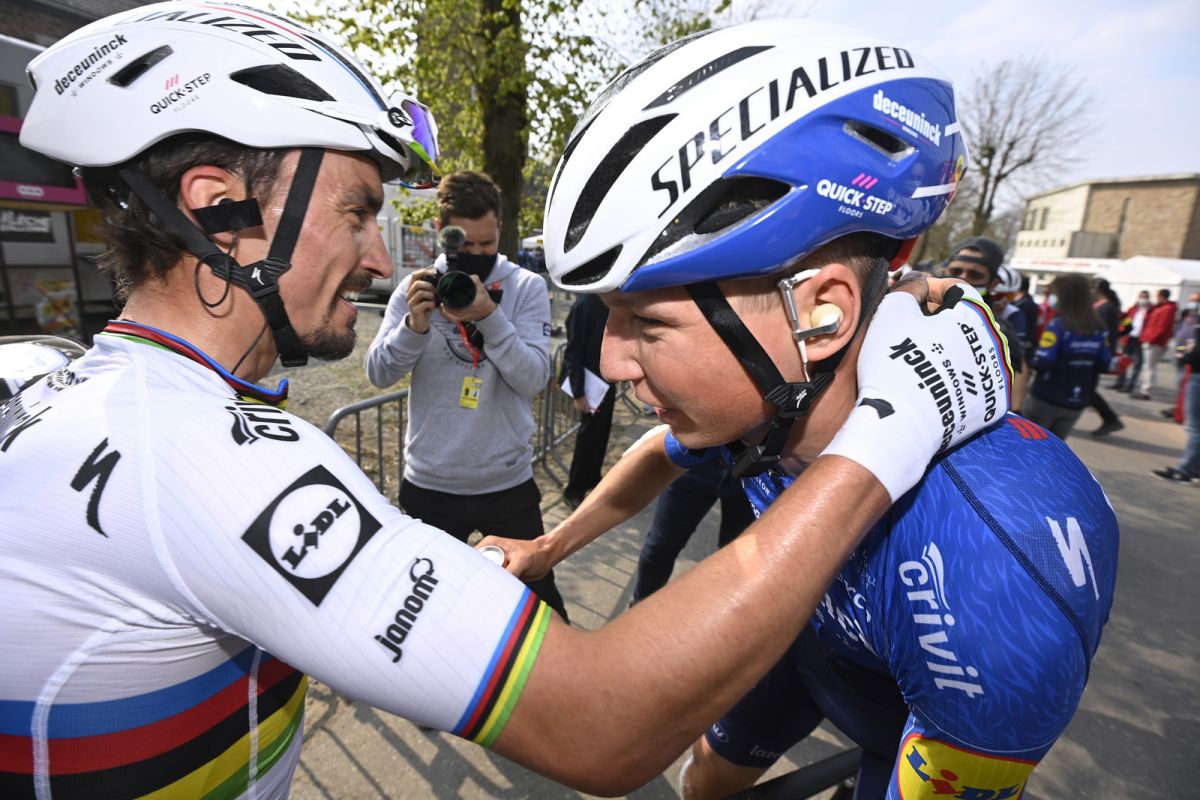 The tension was palpable in the bunch with one kilometer to go, but Julian Alaphilippe – brought into position by Mikkel – remained calm and composed on the endless ascent, where the first to make his move was Primoz Roglic (Jumbo-Visma), with 350 meters to go. Deceuninck – Quick-Step’s leader, oblivious to the brutal double-digit gradients, waited for a moment before unleashing an enormous acceleration that saw him make inroads into the Slovenian’s lead and come past him just 50 meters from the top on his way to a third victory in Flèche Wallonne, a race he never finished outside the top 2 in five participations.

I was very motivated and wanted to show today that I had a strong head, so I gave everything when it mattered.

“Since the start of the season I haven’t won a lot and even though that didn’t stop me from having fun, I really wanted to raise my arms again. The fact that it happened at this great race, more than one month after my Tirreno win, makes it even more beautiful”, said a delighted Julian after his sumptuous performance in the Ardennes.

“The team did a great job today, working tirelessly and protecting me, and I’m really proud of them. I had huge confidence in the guys and was well placed thanks to them when I needed to be. Mikkel dropped me off at the bottom of the Mur in the first positions, and in the end, I knew what I had to do. It’s the legs that make the difference on this hard climb. It wasn’t easy with Roglic out front and Valverde on my wheel, who were both very strong, but I managed to pull it off. Winning in this jersey gives me an amazing feeling, and at the same time, a huge confidence boost. I’m really happy”, added Alaphilippe, the sixth rider in history to win Flèche Wallonne on at least three occasions. 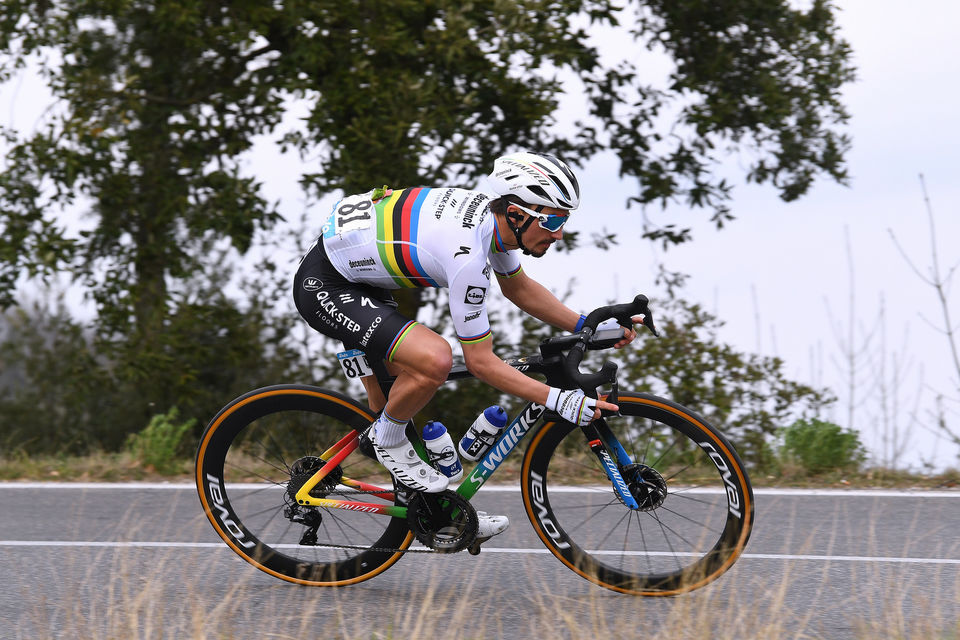 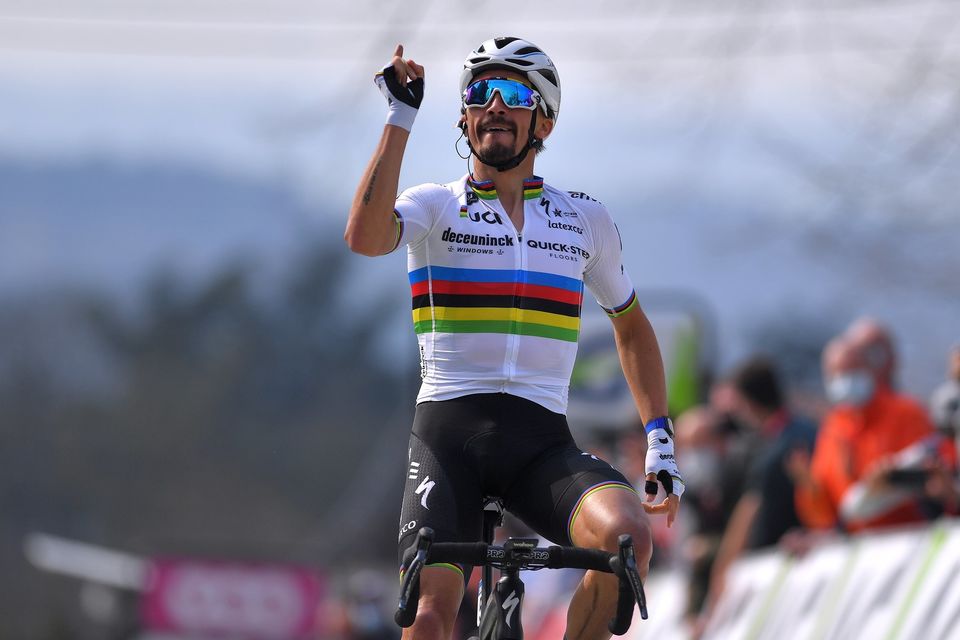