The canny Italian moved up to fourth in the general classification ahead of the race’s first summit finish.

For the second consecutive day, the Corsa Rosa celebrated Fausto Coppi, with a stage between Cuneo and Pinerolo. Seventy years ago, “Il Campionissimo” attacked on Colle della Maddalena, with 192 kilometers to go, and soloed to a resounding win, more than 11 minutes clear of Gino Bartali, wrapping up both the overall and the mountain classification.

This time around, the stage was shorter and much easier, containing just one classified climb, albeit a really tough one: Montoso, which featured inside the last hour of racing and averaged 9.4% over 8.9 kilometers. A fast descent and a 450m hill ramping up to 20% made sure of spicing up the finale of stage 12, which was animated by a huge breakaway group of 25 riders, including Deceuninck – Quick-Step’s Eros Capecchi, who is riding his 11th Giro.

One of the strongest riders in the move, Eros responded to two attacks that seriously reduced the sizeable group on the first-category climb, making it over the top of Montoso as part of a solid quartet which was joined by four other men on the fast and technical descent. The group split once again, once they hit the base of the of the Principi d’Acaja hill in Pinerolo, under the impetus of Gianluca Brambilla (Trek-Segafredo), immediately joined by a flying and smooth Eros Capecchi, who showed a lot of grinta, moving to the front and tapping out the tempo.

On the descent, Eddie Dunbar (Team Ineos) bridged across, but a lack of cooperation allowed two more men to join the party under the flamme rouge arch. Eros tried to anticipate the sprint with 300 meters to go, knowing the others were faster, but couldn’t open a gap and the others powered past him. Fifth on the line, the 32-year-old Deceuninck – Quick-Step rider gave his thoughts at the finish, after his best result of the season.

“The stage was really fast, we were some good riders in the break and built that unassailable lead over the peloton, before a selection was made on the climb. Then, on the steep climb in Pinerolo, I tried to get away with Brambilla; I pulled, did my part, but there wasn’t the collaboration needed to go all the way, so we got caught. I wanted to win, I was hoping to win, so that’s why I tried something before the sprint. It wasn’t possible, but I am satisfied with my day out front and with the legs I had”, said Eros, who is now fourth in the general classification. 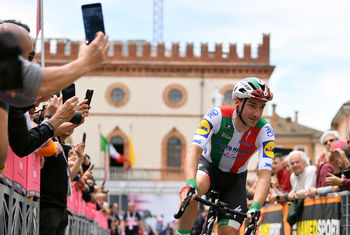 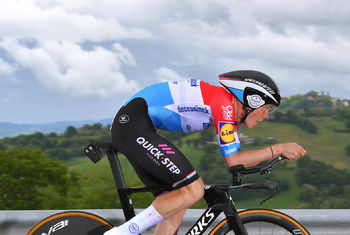 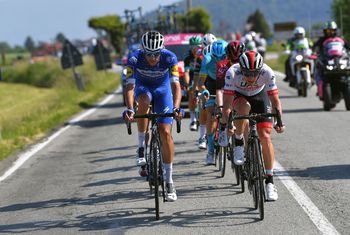